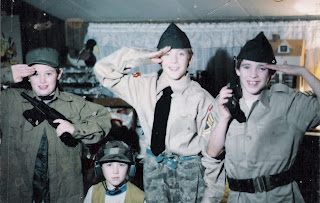 Veterans,this little band of rag-tag soldiers salute you! Veterans' Day, a day to honor our Veterans from all branches of military service. One of these little boys ( center, with black tie) became a U.S. Marine because he truly desired to support our country . He truly has ideals that embrace honor, courage, loyalty. He fought in two tours of duty in Iraq, lost friends and brother Marines. He is now working even harder , as a single Father, raising his 4 daughters with the help and support of family and friends, as he starts a new career.David, you are a hero to your Father and I. Thank-you for your service, and we praise God you are here to raise your daughters. 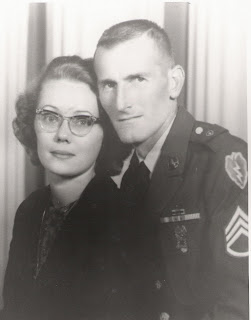 All four of those little rag-tag soldiers are the grandsons of my father, who did 2 tours of duty in Korea, and 2 tours of duty in Vietnam. My father was a man of honor and loyalty too. He came home from his 2nd tour of duty in Vietnam to the attitude and disrespect of the 70's. I still remember with distaste and shame the attitude of so many of my generation as I saw my father and others who served in the military, be disrespected and scorned. We lost some of our best in that war, and those that returned home were often maligned, terribly. "Their deeds will not be less valiant because they are un-praised." Tolkien 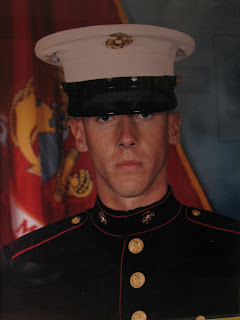 Thank-you David! If my father were alive I would give him a big hug and a kiss on the cheek and say"Thank-you Dad". Thank-you Dad B. ( my Father-in-law) who fought in WWII. Thank-you nephews Brad & Michael. Thank-you Brothers-in-law, Paul, Tom, and Kaare.Thank-you nieces Misa, Anastasia, Jessica. Thank-you Veterans ! "No arsenal, or no weapon in the arsenals of the world, is as formidable as the will and moral courage of free men and women." R. Reagan "You only have the rights you are willing to fight for." "Courage is almost a contradiction in terms. It means a strong desire to live taking the form of readiness to die." G.K. Chesterton "But the freedom that they fought for, and the country grand they wrought for, Is their monument today.. " Thomas D. English
Posted by KathyB. at 2:40 AM

Our veterans can never be thanked enough! To each and all, God's blessings upon you and yours.

You are such a good writer, Kathy. You honor all Veterans with your words. I wish I could say it as nicely as you. Thank you to all the Veterans in your family.

That was a beautiful, heartfelt tribute. We are blessed by their service.

Thanks for this beautiful post...I too am so very grateful to those who are willing to defend our country! My husband being one of them. :D

Thank you for your post. We must never forget the price paid and say thank you to those who have come back, and continue to support them.
The lusterware cup is breathtaking. So delicate! And I have a soft spot for swans these days! We are so pleased that you have come to share your tea treasures with our friends, on Tuesday.
If I was in your neighbourhood I would come for tea and you could teach me how to make the little sheep. I wouldn't be quick but I could add to the flock.
Have a blessed week.
Pam

My DH received a couple of touching "salutes" today from younger men friends of ours - appreciating his service to our Country and our Lord. My Dad was career Air Force and I have a younger cousin still serving as a chaplain in the USAF. You are rightly proud of David - he is a fine man

Wonderful tribute post, Kathy. Thank you to all who have served.

Such a wonderful tribute, Kathy! I am so thankful not only for the veterans I know personally, but for all who have served.
God Bless them all!

so so true Kathy. my father also served in the second world war and in korea together with his three brothers, all survived. thank God we are now respecting our soldiers more, the next step will be to respect our elderly. it is shameful how the elderly are treated in america as disposable.

I am so thankful to your son and all the veterans! Many blessings to them all!

Kathy..... you have a gift with your words and your heart of gold!
Hugs,

THANK YOU for posting!

We have 2 Veteran Day videos posted now on Common Cents....