Can I Blame My Sister ? 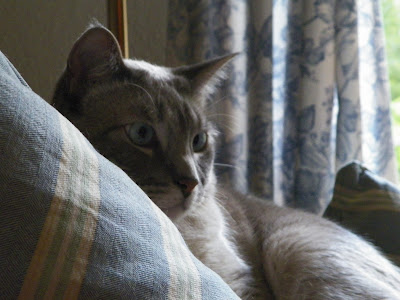 Blizzard, our cat, was subdued and had hidden himself away. I should have realized Thursday morning when he did not open our bedroom door ( yes, he can open firmly shut doors ) to let our other cat Miss Marple  precede him into our bedroom so they could jump into bed with me after my husband left for work , that something was wrong. Our home was too quiet and I did not have him sprawling on my lap as I watched the news on t.v. the previous night.

When Blizzard vomited his food and paid no attention to all the things he loves to do I was concerned. Later, when my grandchildren were holding him they discovered small puddles of urine wherever he had reclined. Blizzard is a very conscientious and tidy cat when it comes to such things so I immediately suspected he was in need of veterinary care. I made an appointment yesterday morning with the vet. Before I left for the vet I watched him for awhile. He would jump into his litter box and seem to strain to urinate. During one attempt he yowled and screamed in a way I had never heard from him. Blizzard was in pain and not able to pass urine. I carted him off to the vet after he crawled into his crate. Blizzard loves the crate. Blizzard was easy to examine. He is very friendly and the vet's office did not scare him at all. Not much scares him. He seemed mighty happy when the vet took him away to the back room for a few hours of observation.

One of the questions the vet asked was if there had been any changes in our home, any upsets, any big differences ? Wow, I realized then that Blizzard must be missing my sister. Bliz fell in love with her and spent many hours watching her, carrying her hair bands around ,stealing her pens and pencils, her phone charger, and at night he would open her door and jump into bed with her.( Surely she would love a 16 pound cat sleeping on her ? ) He would stalk her anytime she was home. My sister moved out this month into her own home and I noticed the first few days she was gone he would stay by her door and watch. I think it finally sunk in that she was not coming back here to stay. If a cat could be despondent, Blizzard was the perfect example.

Blizzard's affliction is one they ( veterinarians & scientists ) think can be brought on by stress or change that disturbs a cat. If left untreated for very long ( a few days) it can be fatal. His problem has a long name, but is fairly common in male cats. Of course I can't prove it, but I know my cat, and I would say he is missing my sister. What do you think ? Can I blame it on her? :)

Blizzard had a lazer treatment to his bladder and is on meds. He is not a happy camper right now and I will be giving pills to a cat twice a day for several days. I love that silly cat though and hope he mends quickly. Besides, Miss Marple needs him to open our bedroom door in the morning so they can cuddle with me.
Posted by KathyB. at 12:19 AM

I'm so glad his problem has been identified and that he is on the mend. Bet you both miss your sister.
Debbie

Isn't it amazing how attached they can get to a human. Blizzard looks Asian to me and those are the smartest, most human-like cats in their personalities. I'm glad you managed to get him help before it was too late. He is a lovely boy and deserves the best. Good thoughts and a hug sent to Blizzard.

Poor Blizzard. I hope that by now he is recovering. I think your explanation makes a lot of sense.

Eggs In My Pocket said...

I hope that blizzard will get better. Yes, cats do miss the ones they know........I believe!

My granddaughter is staying with me for a week, and my cat Punky is madly in love with her.... sure hoping he doesn't get depressed when she leaves. I'll have to watch for that.

Kathy, it's good y'all have figured out what's wrong with Blizzard although I don't envy you giving him pills...my cats despise pills. He's a beautiful boy.

I'm sorry to hear that Blizzard isn't feeling well. We miss our pets when they aren't around, and I'm sure they miss the ones they love too. I hope he feels better soon.

Hello from Kansasland. So sorry your kitty took ill. May all be better soon.

Have a sweet Summer,
d

Sorry to hear about Blizzard I am sure it is your sisters fault for being so special to Blizzard:) Hope all is well soon. B

What a lovely story. I am glad to stop by again and visit you. You are looking beautiful with your natural hair color.
Hope Blizzard is on the mend.