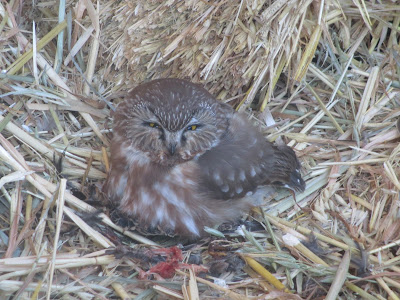 I found what looked like a blood-tinged pile of feathers in our hay barn last week. I did not take time to examine the little bundle of fluff as I stepped around and over it several times to grab flakes of alfalfa for my sheep. The day was cold , the snow was deep, my sheep were baaing loudly to get their day's ration of food and I assumed it was a dead bird. I'd examine it after I finished my barn chores. 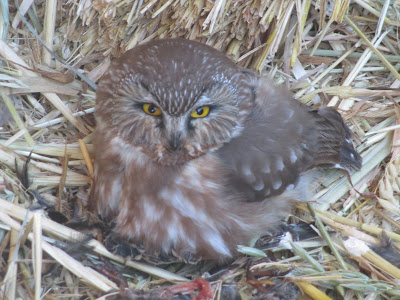 As I walked by the little pile of fluff carrying my bucket of chicken feed I was startled to see eyes peeking out at me as I passed. I observed this was definitely a live owl ! I was afraid the owl was injured because of the blood around it, and that the owl did not seem to be disturbed by my comings and goings even when I stepped over it.

I decided to put it in a hay-filled crate and take to facebook to inquire if there was anyone capable of tending injured owls in the area. I ran to the house to get my camera and grab a small cat crate. Returning to the hay barn I bent down to gently pick the little owl up and whoa .... 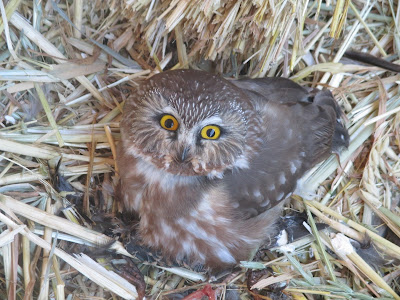 ...look at those eyes ! I think this is the moment the little owl was truly aware of me after I began snapping pictures. A second after I snapped this last picture the owl flew swiftly up and away leaving behind the feet and wings of what had been a starling at least as big as the owl itself. That little owl must have been in a digestive stupor. It even ate the head of the starling.

According to our bird books this is a Northern Saw-whet Owl. We first thought it to be a Pygmy or Elf Owl .Our bird books state these owls feed primarily on insects , the experts might want to add a note to their description about feeding habits. "Northern Saw-Whet Owl ~ 8in. A very tame little owl; smaller than a screech owl, without ear tufts. Underparts have blotchy , reddish brown streaks. Bill black. Forehead streaked with white. - Habitat: Coniferous and mixed woods, swamps."  *Peterson's Field Guide to Birds

You must have been startled when he flew away so suddenly. I love that face. I think I've only seen an owl up close at the zoo exhibit.

Owls are such fascinating creatures - I know I've eaten a few "too big" meals and been in a stupor so am sure poor bird was moaning and groaning in a more appropriate recovery spot after you startled it away from dinner table! fascinating bits of living in the country - I do miss it so much

Great photos :)
It would have been quite a surprise when it took flight!

Don't you just love owls? So interesting! I once found a baby owl in our yard some years back. So happened I knew the local gal that handles orphan animals so she came and picked him up. We've had many screech owls each Spring but he was obviously hungry and dehydrated, so he was raised in a sanctuary and probably released. I saw a bald eagle stalking a sea gull last week. I didn't want to see the ending so I drove home. It is the way of animals, isn't it.
We regularly run off a couple of different hawks that like to stalk our bird feeders. No wonder I'm such a bird lover! I get to see so many!
Glad he gave you time to get good pics. There are probably a lot of large birds around your woods.

Poor guy must have been starving to eat that much of a starling and digestive stupor is a good description. Kind of like how we feel after a big turkey dinner. lol
I watched The Nature of Things (David Suzuki) last night on the great horned owl and they're pretty good at eating a whole rabbit. A friend was over for tea the other day and she watched some crows kill and eat most of a rabbit in her backyard. A little gross at times but the circle of life.

Thanks for sharing your experiences with your move. I know we can move and downsize to a different way of life. Health wise we both need to move to a better place. Getting there will be tough but it can be done. Your move was a brave one and a good one. I will keep an eye on you more as you find and share new things.

My thought after reading your post is the little owl was probably thinking, "I can't believe I ate the whole thing..."

Was also checking out your chicken blog. I am fascinated with chickens. Frizzles are my favorite. Our daughter used to have a few Frizzles and they were adorable. (However, she also had an owl that came by lessened their numbers)

Great photos, Kathy, and glad the little thing was able to fly away.

Oh good grief, I would have peed myself!!! What a darling little creature, those eyes, wow. Nature is a cruel, cute beast. Send snow please!

How incredible to be able to see such a darling little creature up close. Thanks for sharing with these wonderful pictures.

What great photos! It's neat for you to see it up so close. It must have been quite stuffed!!

Amazing photos. So beautiful. You have the knack! Thanks for sharing!

This is an amazing story. Owls are beautiful. I just can't imaging it being so small. That would have scared me to death. We lost another guinea to an owl a few weeks ago.

I had a feeling you were going to tell us the owl was eating something. One time I saw a hawk in the neighbor's yard and it kept rolling on one wing. My instant thought was, who can I call to help it on a Saturday? I thought it was hurt. Well...after watching it for about a minute, it finally took flight, with a squirrel in it's talons, about the size of the hawk! It kept rolling over on it's side trying to get some leverage to fly.

Poor little starling, but what a cute owl!! I can't believe he let you get that close!

How remarkable and how nice that it wasn't injured after all. I hope it goes on to live a happy life. Your pictures are beautiful.

What a precious little guy!!! Glad you could get these wonderful pics. Glad things are progressing nicely at laughing dove farm. Oh how I love that name.... Hugs, lJ