Spot of This and That : Movie and a Ram 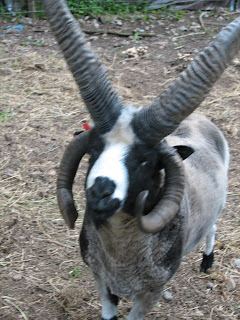 Tonight while I was refilling hummingbird feeders and turning off hoses , I turned to find myself almost face to face with this......my ram, Goth. Fortunately he was as surprised by me, and not quite sure what to make of his freedom. Also fortunately, it is not breeding season so he was NOT in a bad mood. As I have stated in a previous blog, I do not like to be close to Goth without a wheelbarrow, fence, house...etc., in between us.

He was fairly simple to pen up , I just filled a wheelbarrow with alfalfa and he followed it back to his pen. Then I put together and secured the gate he rammed down to make his escape. I suspect I will be putting him in with the ewes ( girl sheep ) within the next 2 or 3 weeks. 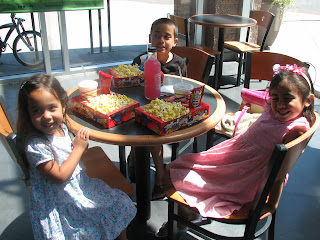 A Day At The Local Theater

I had the opportunity to spend most of today with 3 of our grandchildren. They have been wanting to see the new Pixar movie 'Wall-e' . Their Mommy had to take new baby brother in for his first check up so we all decided to see the early movie. We started with the kids' snack pack, popcorn, candy and beverage of choice. I told the children I wanted their honest opinion ( like THEY would hold back on their opinion) of the movie after we saw it. I would take a picture of them in front of the movie poster and they were to indicate their opinion by showing their thumbs up or down. 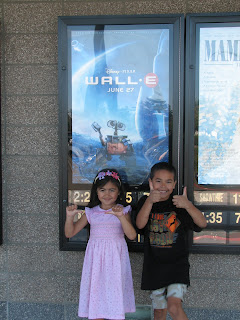 Oldest grandson gave 'Wall-e' a two thumbs up ! Granddaughter #2 gave 'Wall-e' a thumbs sideways, it was O.K. I think she would have appreciated a day doing art projects and having tea parties more than the movies. Granddaughter #5 gave Wall-e a two eyes closed rating, finding her blanket, Grandmas' lap, and a dark theater more conducive to naps than watching 'Wall-e', but in all fairness to the movie, she did watch it 2/3 through and it WAS nap time after all. 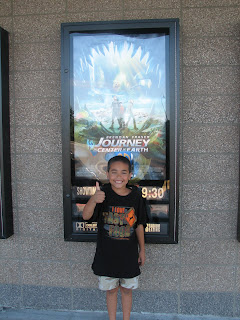 Last week Oldest Grandson and I went to see 'Journey to the Center of the Earth'. We both enjoyed it ! It was old fashioned, corny but entertaining fun. He still talks about it, even after 'Wall-e'.

I did enjoy 'Wall-e', and I am amazed at how Pixar can take animated robots and make them so human with voice sounds and gestures. The eyes ( again with the eye thing, see 'Jeepers, the Spot on Peepers') are the telling thing with the animation.

Ended the day (writing this blog, really ) with a great meal Hubby made and discovered the very, very, best cheese I have ever eaten.....I now have a new favorite craving.......but that is another blog !
Posted by KathyB. at 10:40 PM