Treasure In The Mail 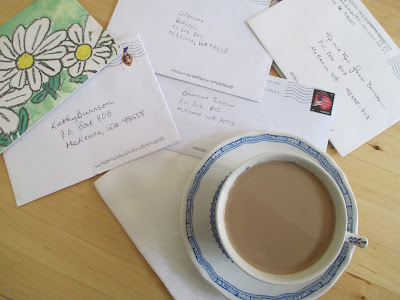 Look at the treasure I found in our mailbox today. Letters, hand written letters ! Two letters were written to me by two of our granddaughters. I am their pen-pal and I love receiving their letters, but probably not near as much as they love receiving mine. ( I hope.) Another was a sweet thank-you from a beloved aunt and uncle. The 4th letter was from a cousin I've just begun an acquaintance with and she WRITES letters and sends interesting and informative e-mails about what is going on in her life. ( What I'd hoped e-mails would really be when I first began to go on-line.)

Writing letters used to be a big part of my life. Our mother had me and my 3 sisters writing regularly to our father when he was stationed over-seas in Vietnam (courtesy of the U.S. Army) and our many relatives scattered far and wide. Looking back on the part letter writing played in my family's life I see both my parents were conscientious letter writers and my father wrote many letters state-side too, keeping in touch with relatives, friends, writing letters to the editor of the local paper, and he always wrote special words of encouragement to our children in their birthday cards. All the letters and birthday cards he wrote to us are cherished to this day though he's been gone from this earth for many years.

For years after my husband and I were married I kept up a regular correspondence with my husband's great-aunts . I did not realize until they passed away that there were very few people who wrote letters to us left in this world. We were told if we would join the modern age ( actual words from family) and get e-mail we would hear more from our family and friends but that proved untrue. We got a lot of  forwards and just plain spam, but no real letters. With facebook now the current mode of keeping in touch we appreciate pictures of relatives far and wide and the ability to connect with them instantly, but even this is to me a pale comparison to a simple hand written letter. ( And don't get me started on facebook being the only way many people send out invitations and thank-yous for very important celebrations.) A hand-written letter or invitation shows the person (s) sending it took a small bit of time to personally write to me. A letter had to be written, an envelope had to be addressed, a stamp purchased, and after affixing the stamp to the envelope containing the letter or invitation, it had to be mailed. Not a lot of effort, but effort that shows someone cared enough . Someone cared enough to send treasure in the mail.

" It seems a long time since the morning mail could be called correspondence." Jacques Barzun

"Letter writing is the only device for combining solitude with good company." Lord Byron

"What a lot we lost when we stopped writing letters. You can't re-read a phone call." Liz Carpenter 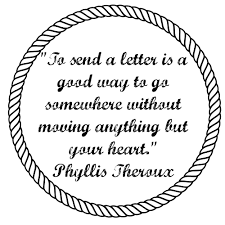 I agree with you on everything here! The quote about solitude and good company is especially enlightening, but your whole post is a good tonic for me. I really miss getting letters, some of which are my most treasured mementos of my childhood and youth. So far none of my grandchildren has been a good letter-writer, but perhaps I just need to give them more encouragement by writing more often to them.
Thank you for writing about this!

Great post Kathy. I also am a letter writer and am surprised at how many people are not and that so few write letters with email. I'm not on FB or twitter and don't even want to be, except it would be great for family photos, but I don't want to 'join'. I did for awhile with FB, but read so much negative stuff, I unjoined and had a hard time doing that as they had me go through the hoops to get out, but I finally did.

It is a treat to get 'real mail' in the mailbox, not just bills, or advertising.

Happy Fall and have a great week ~ FlowerLady

I adore getting notes in the mail:) My Niece and I are always sending each other something! We BOTH appreciate reaching in the mailbox and pulling out a handwritten note or letter! Thanks for sharing this, I am going to mail something out today! HUGS!

Hand written letters arriving in the mail box are the best! What a great idea to have your grands pen pal with you!! I was just thinking the last letter we received and one of the very few was from Dear's 82 year old aunt.
I'm finding more and more as easy as it is to email people do not reply to emails faithfully at all...

I used to write a lot of letters when I was younger. I do miss both writing and receiving hand-written notes.

I have kept my letters and cards through the years. This is true, you cannot reread a phone call!
d

My husband and I were high school sweethearts but he was three grades ahead of me. After he graduated from high school he joined the Marine Corp. We continued our relationship via frequent letters and occasional phone calls. There is something so personal about a hand written letter. You can see the emotion intended by changes in handwriting or a dried tear drop on the page. I encourage young people who are beginning a long distance relationship to write real letters to each other. Modern technology can be wonderful but it can also lead to misunderstandings in a way that a real letter rarely does.

I wrote letters for years but received little to no response, so I have succumbed to email. I agree, it isn't the same. I have kept my favorite letters from family and friends and re-read them from time to time. When my parents died, I found a few letters written by my great aunts when they were young. For me, that is the real tragedy of the demise of letter writing: the personalized glimpse into another era that is lost forever.

I hear recently that book reading is making a comeback as the novelty of screen reading wears thin. And people are buying vinyl records to play on phonographs. Maybe letter writing will become so retro it will become valued again.

Hi Kathy, I love this post. The photo of "grandma" on your letters warms my heart. How special to correspond with your granddaughters. I have been the recipient of several of your handwritten letters and they are treasured! Since I gave up blogging, I only occasionally use facebook. I thought it would be great fun to reach out to folks I had not seen/talked to in MANY years. I am surprised that most simply "accept" my friend request and never even say "hi." I imagine walking down the street and suddenly seeing someone from childhood that I had not seen in 15 years, and simply "nodding" and not saying a word - that is what facebook is like! lol Wishing you a very good evening. xo