I saved this teacup for Tea Time Tuesday especially for this story, written by my husband's sister Judith Sattler.I hope you are able to take the time to read this delightful story, it is well worth the reading~especially if you like tea with the fairies ~
Tea With Fairies
When my girls were considerably smaller than they are now and began losing baby teeth along the way, it was Gossamer Tooth-fairy who came to collect the teeth they left for her under their pillows. She gave them silver coins in exchange for their molars and cuspids, and she always wrote a letter to thank them. It was in this way that we discovered Gossamer had two girls of her own, Timbrel and Whimsey, whom she was training in the family business. Gossamer did not always bring the girls with her, because they were young and sometimes got into mischief. ( I wonder...Is that how Miss Primrose ended up with her head stuck in a dresser drawer?)
~Gossamer Teacup by Royal Albert~
Sometimes if she didn't have a great many other houses to visit, she would stop to take a cup of tea with me. Then one day , she invited me to her place for Tea. You might very well ask where this magical place is but, alas, I cannot say- it is a secret. If I am nothing else honorable I am , most assuredly , Steadfast. But that is beside the point. I went to tea in Fairyland and I will never be the same again. The kind of teatime that transports you out of your own world and into an enchanted place is matchless. The thing of it is, sometimes you don't even have to leave your own kitchen table or back garden to get there.The way in to Make-Believe can be found in the bright glance of the moon at night, the sudden flash of a flicker's wing, ot the singing green of a rainy summer's day. I don't have a favorite teacup, but if I did it would be the one Gossamer gave me to use. She sent it home with me. It is green ( my favorite color for as long as I can remember) and it is embossed with leaves . When I am using it I can imagine that I am supping in a tree wtih my fairy friend, or sitting in the grass beneath the shady boughs of an orchard with the birds piping among the peaches for our pleasure. The cup is large enough for a fairy to take a bath in, but quite diminutive by our standards. I don't mind; I can refill it as many times as I like. Besides, the teeny-tiny teacup from the Peter Rabbit china set I used to serve Gossamer when she came to call was almost as big as her head...and she managed. 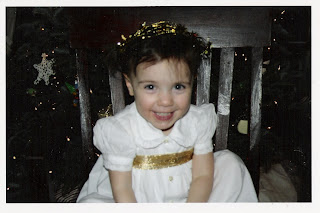 ~Girly-bird~
I haven't sat down to tea with Gossamer for a long while. It is understandable when you remember that the girls stopped losing their teeth years ago. But my oldest daughter has children of her own now and Gossamer promised me the last time she came that when Girly-bird, Monkey, and Ellybean begin losing their baby teeth, she will send Timbrel to gather them. Timbrel always had a sweet tooth; she found it under a pillow and carries it in her pocket. Perhaps I'll be able to tempt her to Tea with a slice of cake and sugar lumps. by Judith Sattler
It is Teacup Tuesday, or Tea Time Tuesday , or as I refer to this, All Things Tea Tuesday~ to see many other lovely or whimsical teacups and tea times click onto : Lady Katherine*, Terri *,Martha*, Wanda Lee *, and Pam*.
Posted by KathyB. at 1:15 AM

Cute story, Kathy, and the picture of Girlybird is adorable!! :D

She does have a talent for words..it must be all that reading she did growing up...maybe I should ask her to help me write my cookbook, I want to add some stories along the way with the recipes. Thank you Kathy.

What an imagination; and she expressed it so well! Read your comments this morning. No..I didn't get to ride in the wagon. I wonder why!
:D

I wonder if Grandma Judy mentioned that GirlieBird is now almost five and keeps trying to wiggle out teeth that are not yet loose, in her hopes of catching her own tiny tooth fairy? :-)

That is a beautiful story and the cup and the real fairy are adorable too. I love stories and, since it is bedtime here in England, I shall take the images to bed with me. Perhaps a fairy will come to me in the night!
Thank you so much.
Blessings, Star

Sweet - very sweet! That is a lovely story - and anyone who's ever lived in the Pacific Northwest knows about "the singing green of a rainy summer's day". She put it beautifully!

Thank you for sharing your darling story and pretty green teacup.
Faries are always invited to tea on Tuesday.
Blessings, Pam

That is a lovely lusterware tea cup.
And the story you share is really sweet.
Thank you so much for sharing your magical tea cup today.
Hugs,
Terri

Stopping by to say hey and see what you're up to. Some tea about now might help energize me...i am tired today. Think the week-end traveling was too much too soon for me.

What an adorable story, as well as little girl and the names are just so sweet. Please tell Judith how much I enjoyed her words and tale...I'll remember that! Blessings to you as you sup from the cup of fairy teas,
Doni

Hi: I just love the story. Your tea cup is stunning. Thank you so much for sharing your treasures. Blessings, Martha

Hi Kathy - such a sweet story by Judith! And so well told. She needs some illustrations!

As for the gophers, let's just say that there are a couple of daring young varmints that have ventured from the pastures up just inside the fenceline to the yard. It's time to get the traps out again. I've not needed them all summer long. Will keep you updated!

Wow! That was an amazing story, Kathy- she must have quite and imagination!!
By the way- I love the music you have on here now... it's so beautiful and soothing.

Your tea cup is so pretty, and oh what a wonderful, imaginative story...... so sweet!

I enjoyed the story too and that gossamer tea cup is so pretty & dainty! I miss having tea parties w/ my grandma when I was a wee little girl.... she always had great cookies to go with it too! :-)

What a fun childhood, to grow up hearing these stories from your mom!
And now Aunt Judy's grandkids get to benefit from her great imagination!