~~~Rams are dangerous! Yes, football team included. Why do you think they are named the Rams ? I try to make sure we are near Goth's pen at all times because rams are dangerous and unpredictable. It is hard for people who don't know much about sheep to fully appreciate the hazard the AVERAGE ram poses. ~~~ 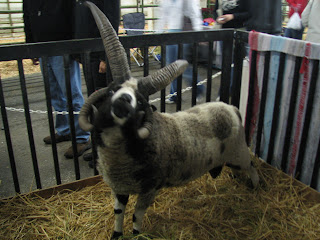 ~~~This gentleman was here at the fair with his family. As they were commenting on Goth's horns and I had to ask someone near Goth's pen to please don't lean over Goth and pet him, this gentleman's family asked him to tell me about his grandfather. Thus, Mr. Philip Griego told me his great-grandfather from Weston, Colorado, had sheep and goats. His g-grandfather was separating the sheep and goats and turning his back to usher a sheep out a gate or door, the ram rammed the g-grandfather in the back. Just like that, a split second of turning his back on the ram, and he was rammed so hard it broke his back and killed him ! 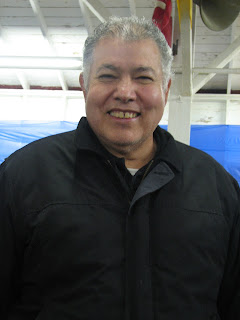 ~~~This is why I spend a lot of time very near Goth's pen. I spin Goth's wool . You can see the wool I dyed turquoise. I think it is spinning into a pretty yarn. Any way, I sit here, spinning, and answer questions about Jacob sheep, or as many people say "spotted goats", and tell people NOT to pet Goth, or put their babies over the rail for a good look, or let their kids dangle over the rail, or...you get the message. 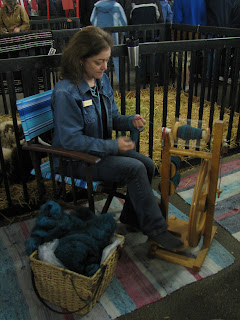 ~~~You'd better pay attention, because Goth is ready to go home and he is cranky...so come on and MAKE HIS DAY ! 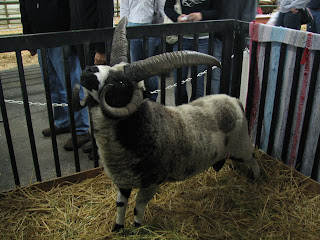 ~~~Having fun at the fair, and we haul home tomorrow. We will probably unload sheep and gear close to midnight and then...praise God, our son is on his way home and he is bringing his 4 daughters, our 4 granddaughters to live in Washington ! Thank-you Lord for a blessing that is priceless and long awaited ! See y'all at the fair .
Posted by KathyB. at 1:01 AM

We heard the great news about your son and granddaughters on James's blog and now yours! God is SO GOOD!!! Praise HIM for this blessing to your family!

Until next time,
Shannon and Adam!

You wouldn't have to tell me twice not to pet Goth--those horns would be enough to keep me a safe distance away. He DOES look cranky in that first picture.
What wonderful news about your family! :-)

I agree with Daisy...Goth's horns would keep me away from him for sure.

Oh, my google alert hit this blog. Thought you may find it interesting since I'm sure it's Goth they are talking about.

Sounds like a great homecoming to be anticipated. It is funny how no matter how often you explain that animals can be dangerous - somebody just wants to try?!! Goth just LOOKS like a danger sign to me. The turquoise yarn looks beautiful - thanks for sharing your fair adventure with us!

Oh, many, many congratulations to David! God is good! :-D