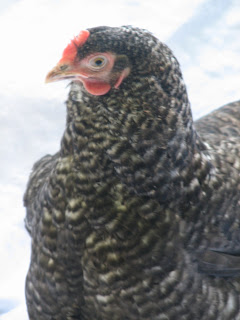 ~~~Mercy was one of 25 chicks to arrive in the mail. She is a Cuckoo Maran, and I ordered this breed specially. She did not appear different when she arrived. After a week or two though, there were 7 chicks that were showing some foot problems. This was a problem. There was no reason my chicks should be in distress. I am the sole caretaker of the chicks I ordered and they did NOT lack proper bedding, food, water, warmth. I was quite diligent about this. I have raised chicks for about 20 years and I know what I am doing. ~~~I ordered the chicks from a producer I have purchased chicks from for years. I have always been happy with the chicks they sent and they stand behind the chicks they sell. I do not believe they sold me bad chicks. What is going on here though ? 7 out of 25 chicks is more than a 1 to 4 ratio of problem chicks. ~~~Anyway, most of the chickens with problems were roosters, and a surplus of roosters is common and easily taken care of. ( they end up in the stew pot ) 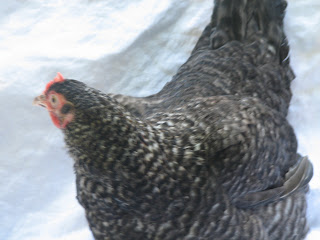 ~~~There were 2 hens with foot problems. One hen was trampled to death early on in her life because she was unable to get out of the way when the chickens fed. This is common, and had I realized she was unable to get away I would have culled her earlier. ( cull: kill, get rid of ) ~~~Miss Mercy was unable to walk well, but there was something about her that kept me from culling her. She was careful when she went to the feeder. I watched her. She patiently waited til the feeding frenzy was over and the other chickens were resting . Then she would wobble / fall, wobble / fall over to the feeder and waterer. After quenching her thirst and eating til full, she would wobble / fall, wobble / fall back to her resting spot under the nest boxes.

~~~Look at Miss Mercy. It is difficult for her to walk, yet she is so plucky and so able. I just did not have the heart to get rid of her. Shame on me ! ~~~Then, the hens all began laying. And so did Miss Mercy ! She was so careful about her eggs. She laid an egg a day. Apparently it is ONLY her feet that are defective. I just could not do what a real farm woman should do....something about Miss Mercy touches my heart.

~~~Look at her feet. They look like they hurt. She has trouble walking. Yet..she does not seem to hurt or be in distress. ~~~I moved her into a pen with just one rooster. That is it, Miss Mercy and a rooster who is very taken with her. She has chosen a nest, a very small space between an old cage and a wall. I do not know how she wobble / falls, wobble / falls into it without hurting herself or dislodging the eggs...but she does. That touches me too. When I saw the nest I realized she is so careful and considerate about the nest and the eggs she lays. O.K. I will keep her. She is a survivor. She is a keeper.

~~~" Mercy :The act of relieving suffering, or the disposition to relieve it." " pity, or good will ."Funk and Wagnalls dictionary ~~~In this case, the mercy is in not doing what all good farm management advice states by culling undesirable or unproductive livestock. My heart says Miss Mercy is at peace with herself and happy to be alive. She will do just fine.......and look, here are 2 of her eggs ! ( below ) 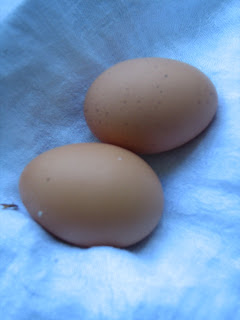 ~~~I had quite a problem this year with foot problems in my chicks and wing problems in my ducklings. I was going to quote a lot of information about nutrition from various poultry books and publications but I will sum up what I believe to be the real problem. Please let me re-state...I have raised chicks and ducklings for years.I purchased them from reputable breeders and suppliers I have used for years. I do not believe they sold me defective poultry. My chicks and ducklings are important to me and they did NOT lack proper bedding, warmth ,water, and provision of food.....however , I have a question or 2 about the quality of feed. ~~~I think the shortage of affordable grains, combined with fuel and production prices affected the quality of the food I bought. It cannot be a coincidence that I had trouble obtaining feed, feed was very expensive, the ducklings and chicks from 2 completely different sources showed physical problems that upon research show the classic text book symptoms of nutritional deficiencies that should NOT have occurred if the usual feed requirements were fulfilled. ~~~When I saw the problems manifested I began adding nutritional supplements to the food / water, and after a few weeks the problems began to disappear. Sometimes it is too late to reverse physical problems of dietary deficiencies, and Miss Mercy will always be handicapped, and always have a place here.
Posted by KathyB. at 12:23 AM

Maybe if you hold your chicks upside down at two a.m. on the night of a full moon, when Jupiter is aligned with Pluto (or what used to be Pluto) this will stop the occurrence (of something). If that doesn't work spin around fifteen times with each one of your twenty-five chickens. Then you will be so dizzy you won't be able to see their feet.

One question: As she's a Cuckoo Maran, are her eggs really dark brown? In the photo they looked like normal brown. Reason I ask is that I have some Cuckoo Marans and am hoping they will be laying the really dark brown eggs. (That is IF any of mine EVER start laying...they are coming up on 5 months old and no hint of an egg yet.)

Omigosh! What a lovely story. Miss Mercy is a survivor, isn't she? And it is an allegory for all our lives, isn't it? None of us is perfect, but some people have a survival instinct that overcomes our adversities. They are the special ones. And even more special are the folks who show mercy.

"The quality of mercy is not strained.
It droppeth as the gentle rain from heaven
Upon the place beneath. It is twice blest:
It blesseth him that gives and him that takes."

What a kind person you are!

She's a survivor, what a great story. I don't think I'd be able to eat any of them!

Lanny, all I need is a car ride to Windy Ridge to get myself dizzy...

Pamela, my Marans started laying at about 5 months..so any day now for you . And yes, those are Miss Mercy's eggs, and yes, they are not as brown as I expected. I raised a flock of Marans 3 years ago, and also some welsummers. Out of my flock only about 4 or 5 laid the dark choclolate brown eggs. So I hatched out the dark brown eggs, raised those chicks up and then they began laying dark brown eggs. Unfortunately , the flock was eaten by hungry dogs..boo hoo, a 3 year breeding program finally come to fruition, and the dogs ate them. So, this new flock I have shown on the blog is my beginning of the same program.
So..all the literature I have read suggests that if you want a particular egg color, hatch out chicks from the eggs you prefer...

Thank-you Daisy and Jo....and Noble Pig...we don't seem to have an appetite for our laying flock. Usually we sell our culls to other people who then eat them..it is the fryers we raise up that we have no trouble at all eating, that is another story ! KathyB.